The exhibition ‘CHINA NOW: Defying the Limits’, opens on the 27th October, 6:30pm, at the Oriente Museum in Lisbon,curated by Helena Silva Correia, Cultural Manager, Curator, Designer and PhD candidate in Cultural Studies at the Lisbon Consortium. 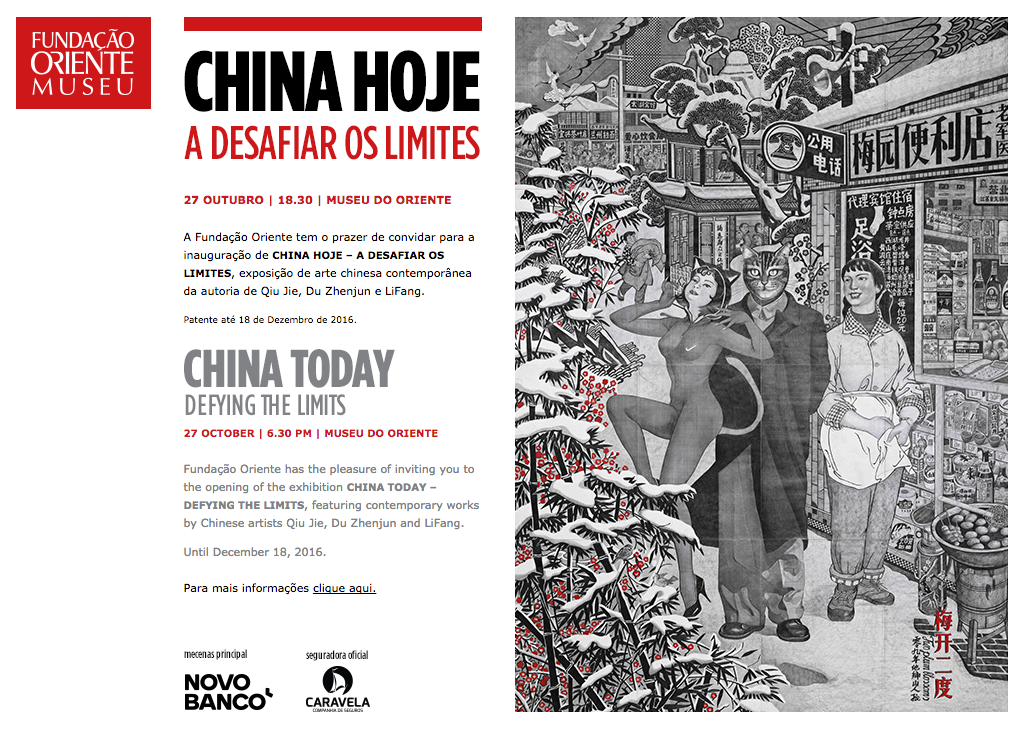 Qui Jin, Du Zhenjun and Lifang presents us with a contemporary view of the numerous existing realities with which China confronts itself today, utilizing three visual and very different discourses; all with its’ incongruences, disparities and inequalities regarding issues with the environment, population growth, and China’s role in the era of Globalization. Whether they be, world(s) of cyberculture such as social media or socio-economical issues but also creative and artistic freedom, where the diffusion of images of the naked human body is still regarded as pornography.
The curatorial discourse is based on the Australian researcher and physic’s research, Graham Turner “Compares the Limits of Growth’ with the reality of 30 years ago” (2008) inspired this visual narrative of these three Chinese artists of today, through their work, present the ‘defying the environmental limits’, the search of the Chinese identity or the struggle for greater freedom of expression, all to reflect upon China’s role in the world today.
Fontes:
http://www.theguardian.com/commentisfree/2014/sep/02/limits-to-growth-was-right-new-research-shows-were-nearing-collapse

‘Cultural Citizenship’ is based on the guarantee of cultural rights for all citizens but it goes further, to stimulate a generation towards a new political conscience “through the appropriation of culture as a right to fruition, experimentation, to information, to memory and participation”, in the words of the philosopher, Marilena Chauí.

Qui Jin approaches his theme of work inspired by the duality of his ‘cultural citizenship’. As Chinese artist, he constructs and imposes the encounter with the reinterpretation of western advertising and ‘pop culture’, utilizing Chinese iconography with references to Mao Tsé-Tung period, uses manly figures with cat heads, in order to create highly detailed pencil drawings, characteristic of ancestral Chinese art.
The solitary artist, Qui Jin calls himself “the man from the other mountains” where he grew up in China before living in Switzerland, from 1989. During his childhood and he lived through the Chinese Cultural Revolution, producing propaganda drawings for the local newspaper, in the Province of Shanghai. Today, his work is intrinsically autobiographical as he combines the realism with cultural references of the West with the Orient, concerned with the doctrinaire form of politics that occurred in China. Qiu utilizes mockery, scorn and defame to counterbalance the revolutionary fiction of his art. His artistic style could be described as ‘political pop’, due to the fact that he confronts the history of Chinese society through imagery while it dissolves itself in the western popular culture, creating a visual portrait of his own personal journey as an artist, living outside China.
The Limits of Growth_Du Zhenjun

The sustainable development concept appeared with the study developed by the United Nations Organization, with regard to climate change at the beginning of the decade of 1970, in response to humanities’ concerns facing social and environmental crisis, that confronted the world since the second half of the previous century. This concept searches to reconcile societies’ necessity towards economical development with the promotion of social development, and respect towards the environment.

Du Zhenjun presents us with a dystopian view of the profound social transformations that China has endured since the “Chinese Cultural Revolution” resorting to digital art and technology to create montages of great photographic detail with enormous visual richness, to translate the frenetic growth of globalized capitalism, over the last two decades – with repercussions on the environment, population growth, the growing scarcity of natural resources – water and food, or the more dramatic effects of global warming, such as the rise of sea levels or poor air quality.
With the Babel Towers of capitalism set in the background, is an allegory to the story of the Genesis, when mankind wanted to construct a city in the shape of a tower that could reach the heavens. God didn’t appreciate the idea and punished mankind by creating numerous languages, and spreading mankind across the World. Today, the World confronts itself with the frenetic economic growth generated by China which defies the limits of CO2 emissions everyday, consequently contributing to the rise of the Planet’s temperature, one may ask until when?

The Universal Declaration of 1948 constitutes ‘freedom of expression’ one of the fundamental human rights, and is part of Constitutions of all the democratic systems. This liberty supposes that all individuals have the right to express themselves without being discriminated by their opinions, as the article 19 from the Human Rights Letter on Freedom of Expression confers: “All have the right to freedom of expression and to opinion. This right includes the freedom to have opinions without interference and to search, receive and give information and ideas via any form of communication and without the concern of borders.”

Li Fang presents us her work utilizing the Human Rights theme — ‘freedom of expression’ which she produced in 2012. The impressionist representation of cyberspace depicts two episodes that Ai Weiwei, in which Li Fang also defies representation and the “mechanical representation” (Benjamin, 1934) contributing with another layer of information or the return of the virtual space to reality, of the limitations imposed by the Chinese authorities to Ai Weiwei’s art work, inevitably associated to the limits of repression and applied force in 2011 when the artist was detained.
In the same year Ai Weiwei posed naked with his four studio assistants, later diffusing the image via social media, generated a wave of indignation from the Chinese authorities, due to the fact that the image(s) placed in circulation were of naked figures. Ai Weiwei contested that “nudism isn’t pornography”. Consequently in the same month, the social media company Facebook decided to also censor the same image and disactivate the artist’s page.
Today, Ai Weiwei continues to fight for more transparency and freedom for the public domain in China, a theme in which Li Fang inspired to give continuity to the movement in honour of the fight for freedom of expression beyond the social spaces and internet’s chronological time(s), where social media companies such as Facebook, Twitter, Wikipedia and Youtube are blocked by the ‘Great Fire Wall of China”, and the largest search engine – Google, currently is unable to operate by the regime.